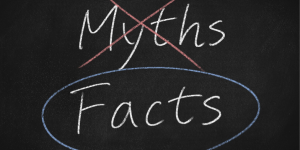 There’s so much information about radon swirling around these days; sometimes it’s difficult to separate radon facts from myths. There are a few people, even a couple scientists, who believe radon is not dangerous, and only affects certain areas in the United States. Jt is important to dispel the radon myths and get the facts about this potentially deadly gas.

When trying to figure out where this radon myth comes from, it’s important to trace it to its origins. One 1995 study from Dr. Bernard Cohen challenges the Environmental Protection Agency’s (EPA) findings on radon hazards. The study suggests that while high levels of radon can lead to cancer, low levels may not pose a risk. However, the World Health Organization analyzed Cohen’s study and found fundamental flaws in his methodology. Furthermore, radon danger skeptics fail to acknowledge the many, many studies linking radon to lung cancer produced in the last couple decades. DNA markers have even been recently identified to isolate radon-induced lung cancer from smoking-induced lung cancer. Highly reputable organizations around the world, including the Centers for Disease Control, National Academy of Science, American Medical Association, World Health Organization, the American Lung Association, and the Environmental Protection Agency have all looked at the overall amount of research and all agree that radon is dangerous to human health. It is the second highest cause of lung cancer, behind smoking.

In reality, radon testing is a simple process. There are many affordable DIY radon testing kits, and a radon test from a qualified company can also be quite affordable. While long-term tests (those that run for 90 days or longer) are more accurate than short-term tests, both are inexpensive and easy to conduct. The fact is that radon professional testing typically only costs about $100-$300, while self-testing kits (which comes with instructions for set-up) are about $25-$65.

Radon Myth #3: You Only Need to Worry About Radon in Certain Areas

While it’s certainly true that certain states and geographical areas are more prone to high radon levels, almost all states have pockets of high radon. Radon levels are extremely local and depend in part on soil composition, atmospheric conditions, and even home construction. Radon gas has been detected all over the United States, so it’s always a good idea to test your home, no matter where you live. In northeast Illinois, all counties have at least a one in five homes with high radon. Yours could be that house.

A simple fix is possible for most homes with high levels of radon. A radon mitigation company like DuPage Radon Contractors can provide a consultation and install a radon removal system quickly. Most radon mitigation systems can reduce a home’s radon levels to 2.0 pCi/L or less. In northeast Illinois, home radon systems typically cost $900 to $5,000, with most systems in the $1,100 to $2,500 range. They can usually be installed in one day.

Radon Myth #5: If Radon Hasn’t Been a Problem, I Don’t Need to Check

This myth about radon is extremely common and can be one of the most dangerous. Many people check for radon when moving into a new home but never retest after that. It’s a fact that radon levels can fluctuate from season to season and year to year, and you should test at least once every two years to make sure they haven’t increased significantly. Long-term exposure to radon can lead to cancer, so make sure to check your radon levels every other year and protect your home.